Using book illustrations in a video made by a library 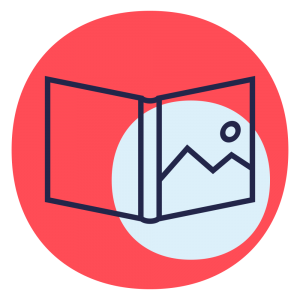 Is a licence always needed?

If the copyright of a work has expired, it can be used freely. Copyright remains valid for 70 years from the end of the year of the author’s death.

A licence is not required if the book is only shown on the video in a secondary role. For example, the cover of the book may be visible on the table between interviewees or in the hands of a person being interviewed. You can also show the book when giving a reading tip, for example.

If the illustration or cover of a book appears on the video in a main role or is more prominently displayed, its use in the video usually requires permission from the copyright holder. You can easily obtain this illustration licence from Kopiosto on behalf of illustrators. Kopiosto’s license covers both domestic and foreign illustrators.

If you are unsure of whether you need permission to use the cover art or illustrations of a book, you can contact Kopiosto.

The Kopiosto licence allows the library to

The licence covers a single video recording or live stream with a maximum duration of 30 minutes.

Illustrations from a maximum of three different publications may be shown with a single licence. The Kopiosto licence does not allow the illustration to be modified, and the illustration may not be digitised into an animation or similar digital book.

In order to read and record the text of a written work or parts of it on video, the library needs a separate permission from the author or copyright holder of the text. For more information, please refer to Sanasto.

You can acquire a licence to use the cover art or illustrations of books from Kopiosto’s customer service unit.

The licence can be acquired for the desired number of months. Upon the expiration of the licence, the video recordings must be made unavailable to the public.

The library must give Kopiosto the following information about the illustrations used on the video recording in connection with the acquisition of the licence:

Kopiosto will distribute the remunerations to the authors of the illustrations.

The licence can be acquired for the desired number of months up to 12 months.

Live stream with no recording available to the public afterwards

The live stream licence is location-specific. If the library wants to leave a live stream with book illustrations available to the public afterwards as a recording, it must purchase a separate licence for the video recording.

library
licence for the use of works
visual artist
How we use cookies?