“I hope that I can continue writing for as long as I live. It would be simply amazing if one of my works was translated into a language such as Estonian or French at some point. Any language will do,” writer Eveliina Talvitie replies when we ask her about her dreams.

One of Talvitie’s long-standing dreams came true four years ago, when she decided to become a freelance writer. Talvitie, who previously worked as a communications manager and journalist, among other things, would write her books alongside her other work.

“My livelihood is now less secure, but I can realise my ambitions and personally define the themes I focus on,” Talvitie describes.

At present, she is polishing up the script for a novel that will be published in August and doing background work and conducting interviews for her next non-fiction book. Talvitie has written eight non-fiction books, and her first fictional novel, Kovakuorinen (Hard-Shelled), was published in 2019.

She feels that the main difference between the two literary genres is that fiction gives the writer more power to define reality. For example, the plot twists and the fate of the characters are in the writer’s hands. According to Talvitie, the writer also inevitably and unconsciously draws more from their own person and experiences.

“It makes writing fiction more comprehensive and bare. Creating fiction means being daring on the one hand and having continuous doubts on the other hand. I was pretty worn out after both my novels. There’s no avoiding the story worming its way under your skin,” Talvitie muses.

People do not always understand how major a role culture and art play in a functioning society. Copyright strengthens the value of artistic work and serves as a tool in correcting notions such as that visibility alone is a sufficient reward for creative work.

“Artists and their works are sometimes defined as free riders whose financial distress is the result of their own choices,” states Talvitie.

Talvitie highlights that although the freedom related to working as a writer is important to her, she still considers it to be work, above all. The significance of copyright is highlighted in present times, in which digitalisation is making content available to everyone in a different way.

The “young female category” has become a stronger presence in politics

Many of Talvitie’s non-fiction books examine equality, feminism and politics. She admits that societal themes and the desire to influence matters are a part of her artistic work.

“I’m trying to be realistic, but I’m also not ashamed of my goal of making the world a better place. For several years, my photographer spouse and I worked on an art project called Erilaiset (Different), which examines the everyday life of disabled children in 11 countries. The aim of the project was to give more visibility to people whose experiences are often pushed to the margin,” Talvitie says.

I’ve sometimes lamented that the world doesn’t seem to have changed all that much after all.

The book Keitäs tyttö kahvia – Naisia politiikan portailla (Girl, Go Make Coffee – Women on the Steps of Politics), which has also been called Talvitie’s breakthrough work, was published in 2013. Through the experiences of women in politics, it depicts what types of gender power dynamics are present in social influencing.

It has been almost eight years since the book’s publication. In December 2019, Sanna Marin became the prime minister of Finland, and every political party in her government was led by a woman. At the time, the newspaper Helsingin Sanomat published an article with the headline: “Power is now in the hands of women in their thirties.”

“As a result of the current government, the ‘young female category’, in which age and gender are examined together, has become a stronger presence in politics,” Talvitie muses regarding the public debate related to the government.

Gender and young age have been used to question the politicians’ qualifications. Although equality has been celebrated in public debate in relation to Marin’s government, and the government composition has garnered a great deal of attention internationally, sexist attitudes have also emerged. For example, the government has been referred to as a “lipstick government”.

“When Mari Kiviniemi became prime minister in 2010, she was referred to as a ‘full-body minister’. I’ve sometimes lamented that the world doesn’t seem to have changed all that much after all,” Talvitie says. “In any case, the female ministers of the current government have, for the most part, performed excellently in the crossfire of various pressures. You simply have to admire them.”

In Estonia, Kaja Kallas was recently elected prime minister. At present, the president, prime minister and minister of foreign affairs are all women in Estonia. Although this is exceptional on a global scale, Talvitie, who lives in Tallinn, has not noticed the Estonian media celebrating it to the same extent as the Finnish media has with regard to Marin’s government.

“I’ve noticed a few texts that do the opposite by warning people not to rejoice excessively. In general, the public debate about gender equality is not particularly active in Estonia, but it is gaining strength,” Talvitie says.

However, she emphasises that oversimplification should be avoided in the comparison of the two countries. Every country has their own history and structure, which affect political debate. 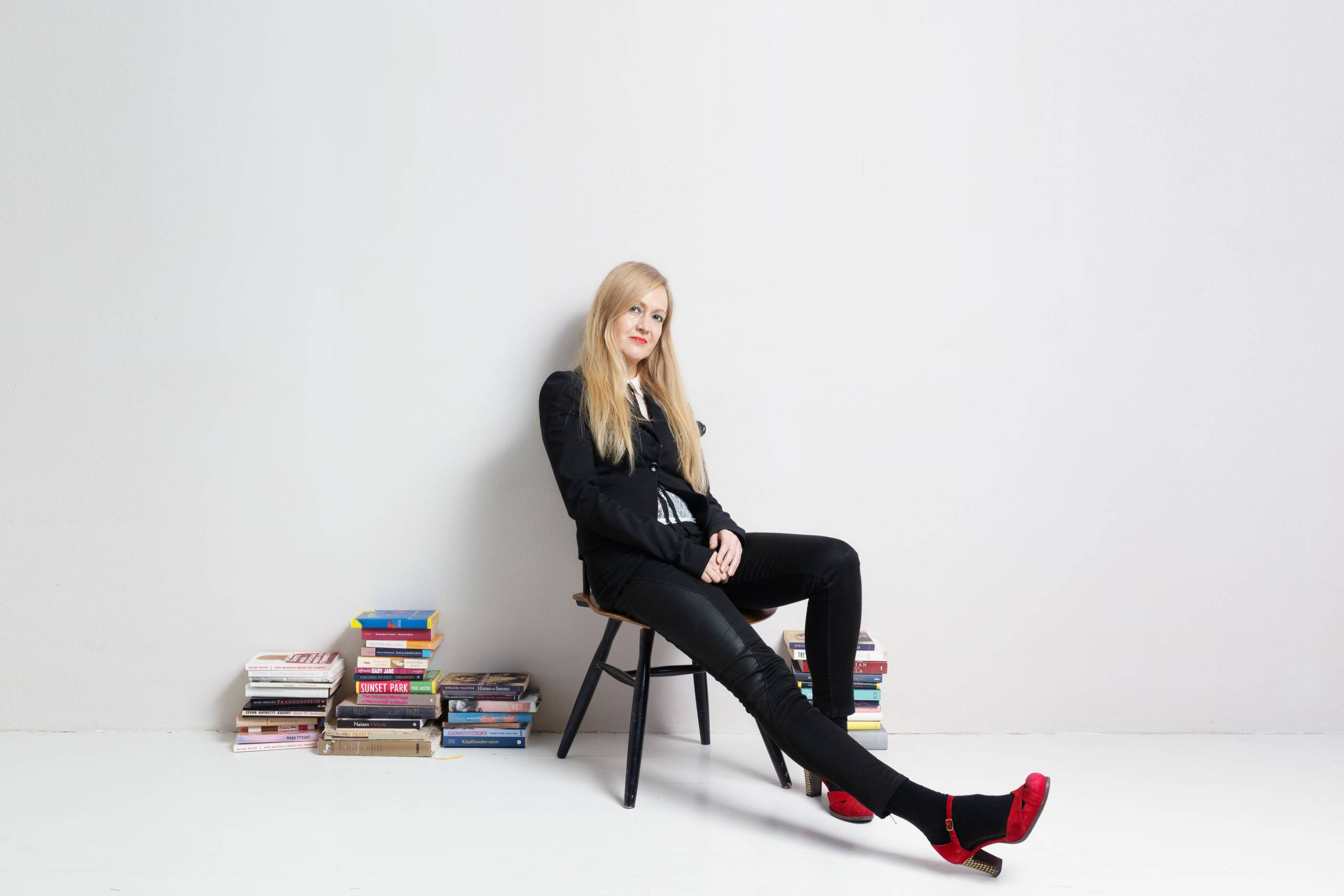 Talvitie’s most recent work, Vanha nainen tanssii (Into), was published at the beginning of January. The book asks why the words “old” and “woman” arouse irritation when used together and prompt many people to argue against them. The work evokes thoughts not only about ageing but also the social discourse on ageing and gender.

“I wanted to write about the significance of life experience, face my 50-year-old self and invite women of different ages who proudly identify as old,” Talvitie says.

Talvitie wrote the first outlines for the book’s synopsis in 2018, but the idea for the book had been building in the back of her mind for a longer period. The book’s publication, which was originally planned for autumn 2020, was ultimately postponed to January of this year due to the COVID-19 pandemic. On the other hand, this gave Talvitie more time to work on the text and simultaneously gave rise to an idea about a monologue play based on the book. It will premiere in Rakastajat threatre in Pori in 2023, Talvitie reveals.

The book recounts the experiences and thoughts of 11 women about life, age and dancing.  Dance also has a metaphorical significance in the novel.

“Each of the persons who appear in the novel have known how to dance to other people’s tune but have eventually found their own.”