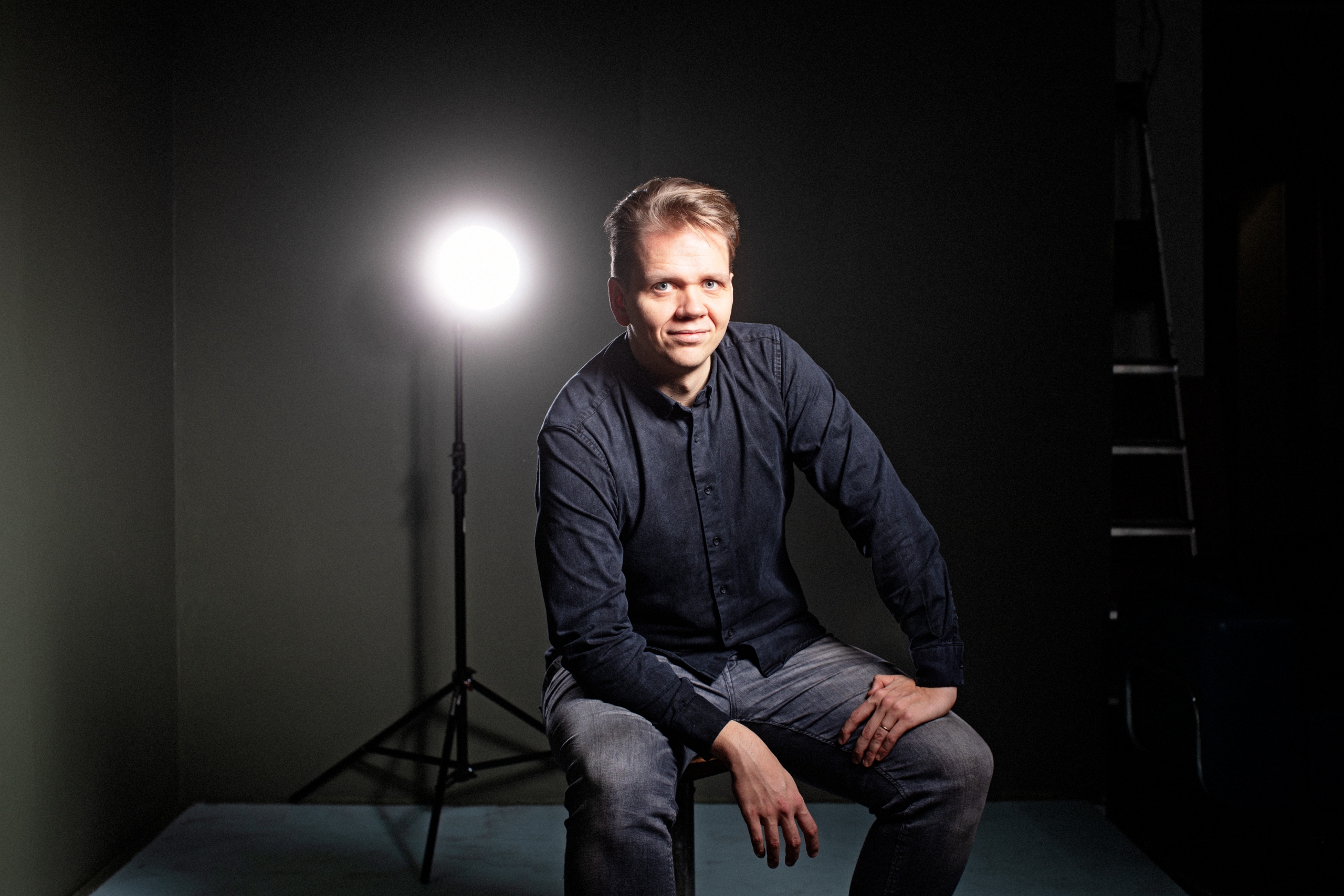 Editor Jussi Rautaniemi has had an impact on the appearance of many highly popular Finnish films and series released in recent years. He has edited the films The Happiest Day in the Life of Olli Mäki and Juice as well as the miniseries M/S Romantic.

“After editing a documentary, it is wonderful to focus on fiction, and after editing fiction, it is really rewarding to work on a documentary. If I had the ability to choose, I would only edit documentaries and fiction in turns,” he says.

The key difference between documentaries and fiction films is the material being worked on. Although there is a lot of material for documentaries, there is only one version of each individual situation. In fiction, however, there are several takes of a scene and the scenes include carefully planned details.

“Editing documentaries is more about creating a structure and finding the right path, whereas in fiction, editing is more subtle and involves a lot of details. Both require the ability to see the big picture, and it is not enough that individual scenes are edited carefully; the entire film has to work as a whole.”

Editing both sketch comedy and drama as well as short and feature films requires editors to be able to recognise what is essential. “Editing is watching the material and understanding its content and nuances so that you are able to shape the material available to you into a narrative, emotional whole.”

In addition to larger projects, Rautaniemi also edits the trailers of films and series, of which there are more than one hundred in his portfolio.

“Trailers are a stimulating way to do something different as they require more focused thinking and the editing requires dexterity. A long narrative is squeezed into a sellable 90-second format. Editing trailers is fun and, most often, lighter, and it stimulates the mind!”

Dream of a career in films fulfilled

Rautaniemi was awarded the Jussi Award for best editing for the film The Happiest Day in the Life of Olli Mäki (2016), and he has been nominated twice, for Korso (2014) and Juice (2018). Four of the works edited by him have been awarded at the Cannes Film Festival.

The path to a professional editor did not go through clearly defined goals, but interest in films has always been a beacon for him.

“I ended up as an editor because I wanted to be involved in making films. I did not have any other particular goals and I never specifically wanted to become an editor.”

When he was young, Rautaniemi knew practically nothing about the film industry. The thought of making real films and securing an income by doing so seemed a far-fetched idea back in Kotka in the early 2000s.

“I set a vaguely defined profession in the audiovisual industry as my goal,” he says.

After making videos for a year at the university of applied sciences, Rautaniemi applied and was accepted into the University of Art and Design Helsinki to study editing.

“I chose editing for the simple reason that, when I checked the preliminary assignments of the entrance exam, I figured that I do not know how to complete any of the other assignments. During my studies, I started liking editing and got to know many people who I still have the privilege to work with.”

“It is probably because of this that I am still occasionally baffled that I get to work in this industry.”

Editors work as a part of a creative group

The coronavirus pandemic has not yet had any dramatic effect on Rautaniemi’s work. When the pandemic reached Finland, he was starting editing the film Compartment no 6, based on a novel by Rosa Liksom and directed by Juho Kuosmanen, still waiting for its premiere.

He has given some thought to the situation of the industry, however: “Currently, the pandemic is causing problems concerning the release of films, which only naturally affects everyone working in the industry.”

The professional editor has been able to adjust to the increased remoteness adequately, but, according to Rautaniemi, editing cannot be performed entirely remotely. “The chance to have immediate dialogue is often an essential part of editing.”

In film and TV productions, the editor is primarily in contact with the director.

“Editing is basically discussing the available material with the director. Composers and sound designers are also often involved in the process, and it is good to keep in contact with the producer of the film, too.”

Each director has their own way of working. Some prefer to be present in the editing room, whereas others like to watch the edited versions on their own and provide feedback.

It is highly unlikely that anybody is confused about whether a trained violinist can decide how to play in an orchestra or if they are performing someone else’s ideas.

It is highly unlikely that anybody is confused about whether a trained violinist can decide how to play in an orchestra or if they are performing someone else’s ideas.

Although editing is somewhat different from other jobs in the creative industry, Rautaniemi sees a lot of similarities as well.

“When you come to think of it, nearly all creative authors have some material they need to work on, introducing certain constraints.”

Editing, unlike screenwriting, is not about creating something new and editors do not have the same power as directors but, for Rautaniemi as an editor, this is not an essential issue.

“It is highly unlikely that anybody is confused about whether a trained violinist can decide how to play in an orchestra or if they are performing someone else’s ideas.”

Each piece of the working group’s puzzle has an important role in making the final result work.

“Directors work with different professionals, such as writers, actors, camera operators, editors, composers and sound designers in different phases. Every one of them needs to contribute with their skills to making the film as good as possible,” Rautaniemi says.

Appreciation is apparent in the working conditions

Viewers can typically see only the final result of the work involved in making a film or series, which makes it perhaps difficult to understand the efforts of the editor. Rautaniemi does not mind, however.

“Regular viewers should not focus on editing but enjoy the film or series. Whenever I watch a film or series, I rarely think about editing, unless its quality is distinctly good or bad.”

For the editor, it is more important that the work community is respected and valued, which often affects the working conditions, including whether the editor gets the resources and compensation they require and are entitled to.

“These things are not always self-evident, and schedules are typically hectic as an effort to make the process more efficient. However, it is important to remember that the more time is allocated to editing, the better the film will be.”

Rautaniemi hopes that, in allocating the resources for post-production, it would be more widely recognised that editing does not need to be performed by a single person. “It is particularly common in TV series that there are several editors working in production who have assistants in full-time positions.”

Recognising editing as a task that is entitled to copyrights is also a way of showing appreciation. Rautaniemi says that this has been wrongly questioned. “The editor is a professional who works with the content and has an essential role in creating the work.”

A return to childhood?

The latest released work edited by Rautaniemi was the documentary film Aalto by Virpi Suutari, which attracted a wide audience in theatres in the autumn.

“Aalto has to be the most demanding but also the most rewarding production I have been involved with,” Rautaniemi says.

Before Christmas, Rautaniemi finished his work with Saara Saarela’s film The Guardian of Water, which is based on Emmi Itäranta’s novel Memory of Water (2012). “This is the first adventure film with elements of speculative fiction I have been involved with. As a big sci-fi fan and a tea enthusiast, I have looked forward to the production of The Guardian of Water.”

Rautaniemi is currently working on the drama series Transport directed by Auli Mantila.

Does the editor of a wide variety of films and series have a dream project in mind?

“My dream is to make movies like the ones I grew up with, such as the original Star Wars, Indiana Jones, Back to the Future, Alien or Terminator 2. It seems that films like these are not made in Finland or any other part of the world anymore!”

Nevertheless, Rautaniemi is delighted with his current situation: “I am really happy that I have so much work in increasingly interesting productions.”