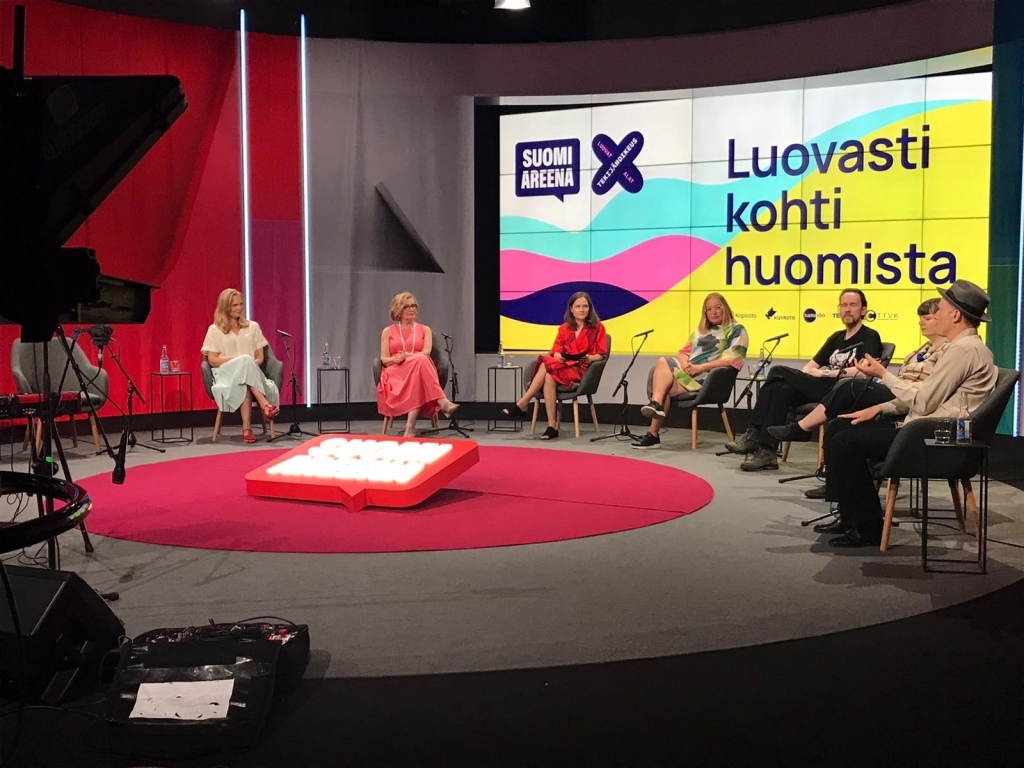 The discussion ‘Luovasti kohti huomista – luova työ digiajassa’ in SuomiAreena was attended by MPs Hanna Kosonen (left) and Paula Risikko. The event was hosted by Ronja Salmi. The creative industry was represented by film director Saara Saarela, writer JP Koskinen, visual artist Camilla Vuorenmaa and musician-songwriter Markus Nordenstreng.Even legal music services give the musician a very small slice of the profits. Not to mention the social media giants, who have long been allowed to run wild without paying a cent. It’s a problem that unites the entire cultural industry,’ says songwriter and musician Markus Nordenstreng.

Legislation could address the problem and guarantee decent working conditions for authors. Creative workers discussed this challenge with policy-makers in SuomiAreena on 13 July.

The situation could be improved by the Copyright Act, which is currently being revised based on the relevant EU directive. The revision will have a significant impact on how people can earn a living through creative work in years to come.

The EU Directive on Copyright in the Digital Single Market was approved in 2019, and the legislative reform to implement it in Finland is currently underway. Among other things, the directive obliges social media platforms to conclude agreements with representatives of the creative industries.

‘In practice, the platforms should compensate creative workers for the use of their works in the service and ensure that the works are used with permission,’ said Ronja Salmi, host of the SuomiAreena event.

However, it is still uncertain whether the solutions found at the EU level will find their way into Finnish legislation, and especially the improvement in authors’ livelihoods and bargaining power provided by the directive is in danger of being watered down in the regulatory drafting process.

According to Member of Parliament and Vice Chair of the Commerce Committee Hanna Kosonen (Centre Party), Finland wants to adopt a line in favour of authors and copyright. According to her, three things must be taken into account when reforming the Copyright Act:

‘Firstly, the digital market must be lively, and all parties – platforms, publishers, production companies and authors – must be able to operate in it. Secondly, the creative industries take many different forms and include many different operators, which must be taken into account in the legislation. Thirdly, it must be ensured that authors receive the compensation they deserve.’

Member of Parliament and Chair of the Education and Culture Committee Paula Risikko (National Coalition Party) praises the EU for awakening to the fact that creative workers need to be compensated for their work. According to Risikko, the implementation of the directive in Finnish legislation must ensure that the rights of different parties are realised.

‘The aim is to strike a balance between the platform service provider, content provider, consumer and copyright holders,’ Risikko says.

Visual artist Camilla Vuorenmaa wonders why e.g. Denmark has already been able to implement the directive but Finland is still preparing the act.

Kosonen says that Finland wanted to wait for Commission guidance on the application of Article 17. It was not received until May. According to Risikko, further work is needed to make the directive compatible with Finnish legislation. However, both MPs are confident that the draft Copyright Act will be sent out for consultation in early autumn and discussed by the Education and Culture Committee in week 42, i.e. in mid-October.

It must be possible to address unauthorised use of works

On digital platforms, enforcing copyright and dealing with infringements is also a challenge. There is not much an author can do to prohibit the use of their content and have it removed from the thousands of services and sites on the internet. The EU’s pending Digital Services Act (DSA) would make it easier to address all kinds of infringements.

Currently, anyone can set up a website anonymously and use it to run illegal activities. The website service provider is not obliged to find out who is running the website, and there is no way for public authorities or individual citizens to get behind this anonymity.

‘To me, it doesn’t make any sense. You can’t set up a brick-and-mortar store anonymously either. This matter should be brought to the current millennium. I hope that Finland, like other EU countries, will take a very firm line on the DSA regulation. Platform companies must be held accountable,’ Kosonen says.

‘Unless the problem is addressed, it is inevitable that e.g. films and TV series for large audiences will find their way into illegal services,’ says film director Saara Saarela.

‘When this happens, the filmmaker or production company has no means of intervening in the illegal use. It must be possible to solve this in some other way.’

Today, as many as 6 million domestic films and 12 million episodes of domestic TV series are consumed from unauthorised sources in Finland every year.

‘That accounts for the livelihood of many, many people, and with that money you could make a lot of content and employ a lot of people,’ Saarela says.

See a recording of the event (only in Finnish): https://www.mtv.fi/sarja/suomiareena-10003189/luovasti-kohti-huomista-luova-tyo-digiajassa-1442532. 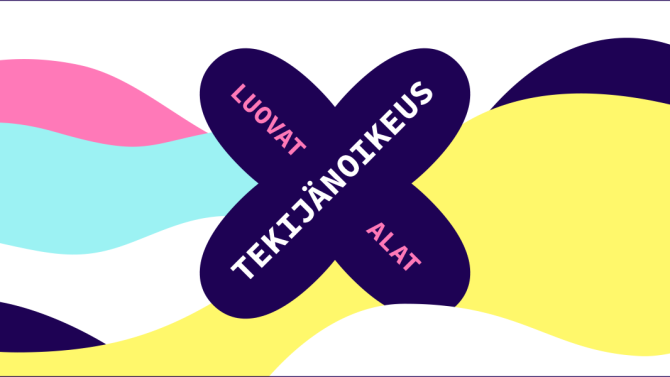 A creative path to the future: SuomiAreena to examine creative work in the digital age