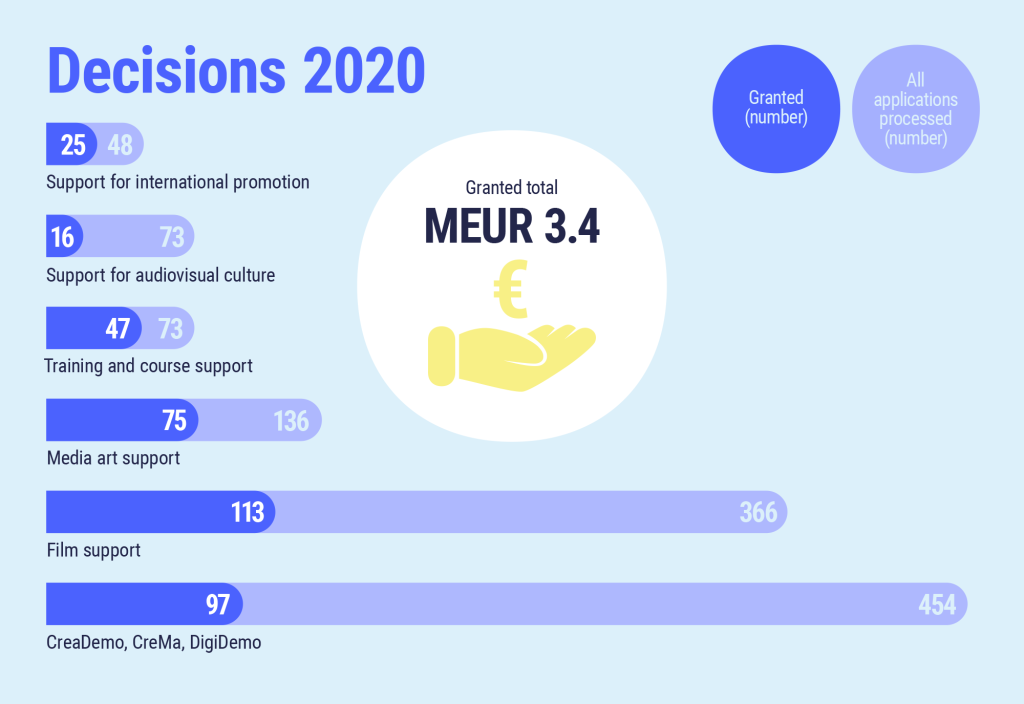 Applications processed by AVEK in 2020 (number), applications which were granted support (number) and the sum granted altogether in 2020 (EUR).

In 2020, we distributed EUR 3.4 million as different types of support to 373 applicants. This support was granted extensively throughout Finland.

Despite the coronavirus pandemic, we have mostly been able to distribute the grants as usual. Although there have been fewer personal meetings, there has been more emphasis on interaction with applicants than before.

“We have tried to actively deliver the message that applicants can always contact us for advice,” says AVEK’s Director Ulla Simonen.

An additional goal has been to increase the meetings between authors. In the spring, we arranged an online event called Iltapäivä AVEKin kanssa (An Afternoon with AVEK) for makers of documentary films and animators. The filmmakers are also featured in the podcast (in Finnish) with the same name. The first episodes of the podcast were released in the autumn.

Regional percentages of approved applications processed by AVEK in 2020.

Applications for film support increased significantly from the previous year

The number of applications for different types of film support (51%) and the CreaDemo support for companies in the creative industries (253%) saw a particularly high increase. In 2019, the number of CreaDemo applications received was 43, whereas the corresponding figure in 2020 was 152.

“The increase in the number of applications indicates how important our support is in the field of audiovisual culture. The applicants really need these grants,” Simonen says. 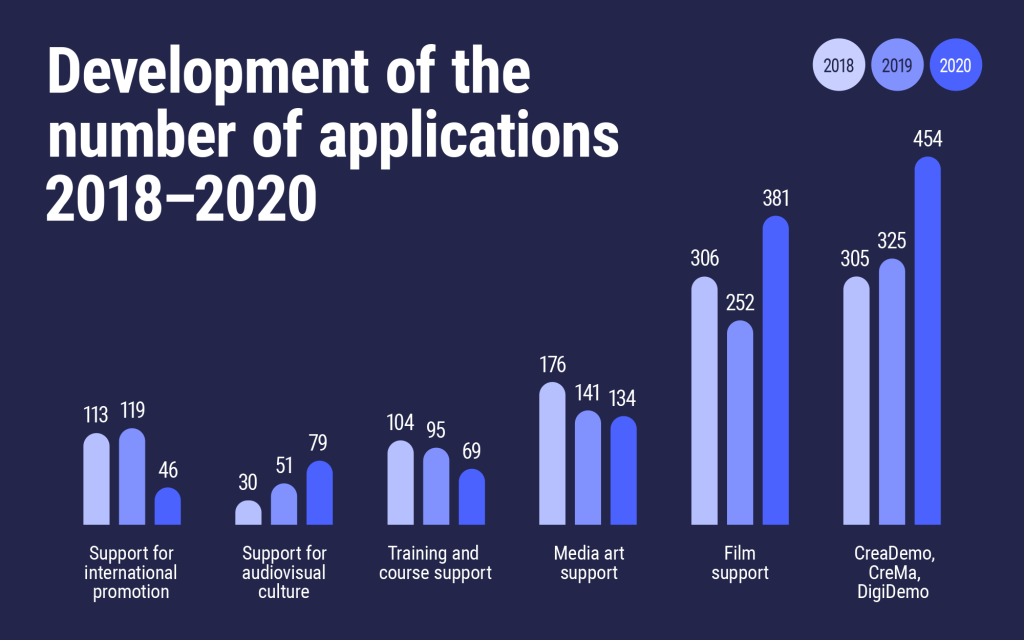 At the end of the year, we allocated EUR 30,000 of the support for international promotion to filmmakers in developing countries to support professional activities in countries where the funding available to documentarists has declined as a result of the coronavirus pandemic.

“We wanted to bear our global responsibility in this situation. The views of documentarists are needed now more than ever,” Simonen says.

Last year, we invested in the constant development of our activities with consideration to the feedback provided by authors. More active investigation of the application statistics supported the development of activities.

“Our mission is to become more approachable and transparent and treat our applicants equally,” Simonen says.

We have moved the emphasis of the support towards the development support for the early stages of productions in order to make it easier to start new projects. Furthermore, eco support for responsible productions and film impact support aimed at promoting the social impact of films can now be applied for from AVEK.

In order to make our activities more transparent, we demonstrated the support decision-making process and decision criteria to applicants at the beginning of last year. The internal definition of decision criteria allows for the equal treatment of applicants.

We also aim to improve equality between applicants with new support guidelines, which entered into force at the beginning of 2021. From now on, film and media art grants have fixed sums.

“The sums applied for the design phases of media art projects have been smaller than the sums for film projects, although the work is practically identical. Through fixed sums, these types of situations can be corrected,” says Simonen.