“We collect the remunerations professionals and companies in creative industries are entitled to for the use of their works. When a new type of remuneration is introduced, it is not always clear how the funds should be distributed to different copyright holders, which means that agreements and negotiations must be made and had. Last year, it was particularly delightful that we reached a conclusion in the negotiations about the remunerations concerning the online recording services of foreign TV programmes and were able to distribute the money quickly afterwards,” says Kopiosto’s CEO Valtteri Niiranen.

Copyright remunerations were paid to copyright holders both directly and through the organisations that represent them. 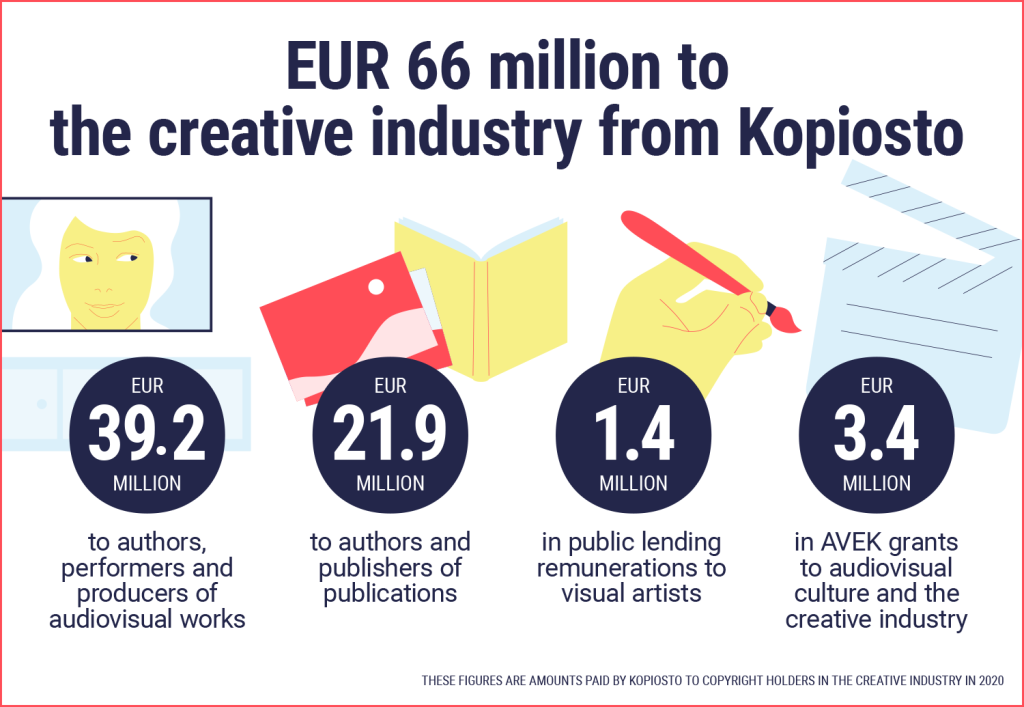 The remunerations were collected according to the copying and use licences sold to educational institutions, public administration and companies. Kopiosto also distributes a compensation for private copying to authors of audiovisual works from the appropriations based on the state budget and public lending remunerations to visual artists.

In 2020, Kopiosto paid a total of EUR 39.2 million to the copyright holders of audiovisual works and EUR 21.9 million to the authors and publishers of publications. A total of EUR 1.4 million was paid to visual artists as public lending remunerations.

The Promotion Centre for Audiovisual Culture AVEK, a part of Kopiosto, distributed a total of EUR 3.4 million to the Finnish AV culture and creative industries in 2020. AVEK’s funds are primarily based on compensations for private copying. AVEK also supports the creative industries with the DigiDemo and CreaDemo appropriations and the Mediarata special appropriation granted by the Ministry of Education and Culture.

In 2020, Kopiosto paid a total of EUR 39.2 million to the copyright holders of television and radio programmes. Remunerations were paid to about 10,000 authors and performers.

The personal remunerations paid to audiovisual authors included EUR 3.6 million for educational recordings and the educational use of Finnish TV programmes in Yle Areena, EUR 3.3 million as compensations for private copying, EUR 3.0 million for the online recording services of foreign TV programmes and EUR 0.4 million for other use of TV and radio material. The education fund KOURA was provided with EUR 0.5 million to be distributed as grants and awards to audiovisual authors.

EUR 3.0 million of the remunerations from online recording services were transferred to Teosto and Gramex to be distributed to copyright holders of musical works. The share of producers for 2015–2020 was paid to APFI, totalling EUR 23.3 million.

In addition, Kopiosto paid a total of EUR 2.1 million to foreign broadcasting companies, producers and authors for the retransmission of foreign TV channels.

Kopiosto paid EUR 21.9 million to authors and publishers for the copying and use of books, newspapers, magazines and sheet music in 2020.

Nearly EUR 20.6 million was paid to Kopiosto’s Finnish member organisations. Kopiosto paid EUR 1.3 million of remunerations collected from the copying of foreign materials to foreign sister organisations according to reciprocal agreements made.

In Finland, 26 organisations from different cultural and communication industries received remunerations. Organisations that represent authors will re-distribute the majority of their compensations as grants. Most of the compensations paid to publisher organisations are paid directly to the publishers. Kopiosto’s member organisations also use the copying remunerations paid to them to fund various awards for culture and communication industries. These include e.g. the Critics’ Spurs, Topelius, Mikael Agricola, Science Journalist Award, Warelius and Rudolf Koivu awards as well as the Finlandia awards for literature.