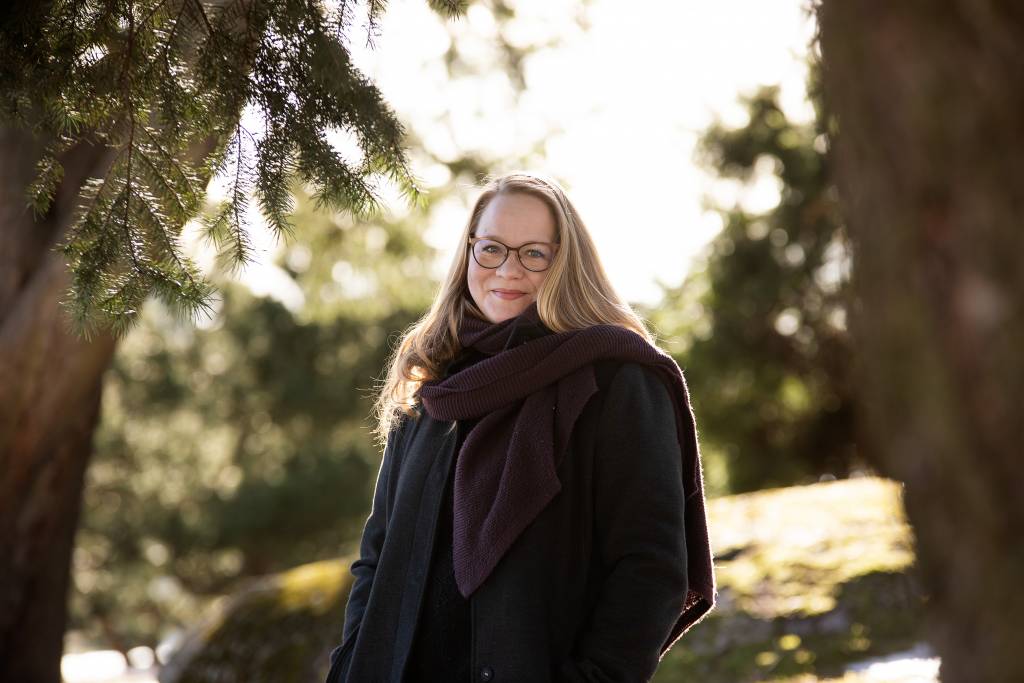 Journalist and writer Anu Silfverberg is one of the founding members of Long Play, which focuses on long stories. Silfverberg ended up becoming a journalist through her love of writing, and describes herself as a text-centric journalist.

‘It is also demonstrated by the fact that I’ve built my career with narrative feature journalism. I wouldn’t be a very good news reporter,’ Silfverberg muses.

More than twenty years ago, the passionate writer graduated as Master of Arts majoring in English Philology. Translation was not really her thing, and Silfverberg dreamt of a career in literature or journalism. However, her dreams would not have led to her becoming a journalist without the help of a brave friend. Elina Hirvonen, now known as a writer, documentary filmmaker and journalist, gave her friend a boost. When Silfverberg expressed her hopes to get into journalism, Hirvonen suggested brainstorming and writing stories together and sending them to newspapers.

‘Elina, or Tipi, as I call her, said that if the stories are rejected, we will share the shame as well, and then it won’t be so terrible. So that’s what we did. We thought of stories and Tipi sent them and called the editors. I would never have been able to call a paper like Helsingin Sanomat. She made the calls, and I was a bundle of nerves rolling on the floor next to her,’ Silfverberg says.

Hirvonen and Silfverberg got some of their ideas accepted and ended up writing their first stories together for a long time. Silfverberg describes this early stage as an important time in her career – she realised that she did not have to manage or learn everything alone. The idea of the significance of working together has also carried on later in her career.

‘Writing is often thought of as a solo act, which it kind of is. But all my articles, story projects, books and texts with any significance were done together with other people or with the help of others. Either with professional readers, i.e. an editor, or writing together with a colleague,’ Silfverberg says.

She would like there to be more communality in today’s journalism as well, in which many work as freelancers and the challenge is loneliness. It makes it difficult to find meaning in work and see the work’s value to society.

There are topics, story projects, themes and types of texts that would not see the light of day without grant funding.

When Silfverberg has been to talk to young people about journalism, she has noticed that they are sceptical about getting into the industry. Sometimes you hear that you can study journalism but then use that path to get into communications and earn a living that way. The number of people working in journalism is declining, while the number of people working in communications and public relations is increasing.

‘I think it needs to be possible to tell young people who are now studying journalism or starting in the industry that this work has value,’ Silfverberg points out.

These thoughts also gave rise to the idea of a journalist mentoring programme together with Reetta Räty, journalist and professor of practice in journalism at Tampere University. Silfverberg and Räty have learned the profession like apprentices, with the help of experienced editorial colleagues, while today a lot of journalists are left outside the editorial office. Many in the industry work as freelancers, part-time workers or entrepreneurs, for example. For this reason, the new mentoring programme is aimed at journalists in the early stages of their careers. Silfverberg and Räty received support for the implementation of the course from Kone Foundation, and the course will be held in autumn 2021.

‘We thought that we need to find ways to build editorial communality outside the editorial office now that so many journalists are forced to work as entrepreneurs,’ Silfverberg says.

The earning model in journalism has long been undergoing a transition, as content has increasingly moved online and advertising revenue has declined. While foundation funding, such as that provided by Kone Foundation, and various grants cannot solve the whole situation, Silfverberg sees them playing an increasingly important role in supporting the social task of journalism.

Financial support enables the writing of many stories that require a lot of investigation and reflection. Silfverberg has previously received grants from such parties as JOKES, the Foundation to Promote Journalistic Culture, the grants of which are funded using copyright remunerations collected by Kopiosto.

‘A grant pays for time. There are topics, story projects, themes and types of texts that would not see the light of day without grant funding,’ she says.

Concerns about the gentrification of journalism

Each year, Long Play publishes 12 long stories that are ‘longer than magazine articles but shorter than books.’ At the end of March, Silfverberg published an essay titled Vuodet Monican kanssa (Years with Monica), dealing with the media’s irresponsibility, use of power and public humiliation. When the secret affair between Monica Lewinsky and US President Bill Clinton was revealed in the 1990s, Lewinsky, who was in her twenties, was subjected to public ridicule and humiliation. The media did not look critically at the issue. Instead, the press participated in the public humiliation.

‘When writing the story, I read endless articles from that time. The language directed at Lewinsky seems absolutely inconceivable these days. That young person was called all kinds of names, including “whore”, down to such newspapers as the Washington Post and Wall Street Journal. But it was considered normal at the time and did not draw any attention. As I read those stories, I thought about what is considered so normal now that we can’t see and notice it,’ Silfverberg says.

‘We’ve read a hundred stories about how educated people work remotely and spend their time baking bread. You have to admit that the press coverage people like us have been getting over the past year is completely excessive,’ she says.

The results of a journalist’s work are often mainly measured by counting clicks and the number of readers, which stems from a problematic way of thinking, according to Silfverberg. The challenges of journalism are thought to be solved by writing stories that the reader already wants to read.

‘However, it is the duty of journalism to look for stories that we cannot yet imagine, dig these stories up and act as a podium for voices other than those that are already used to being heard.’

copying remunerations
grant
journalist
writer
How we use cookies?