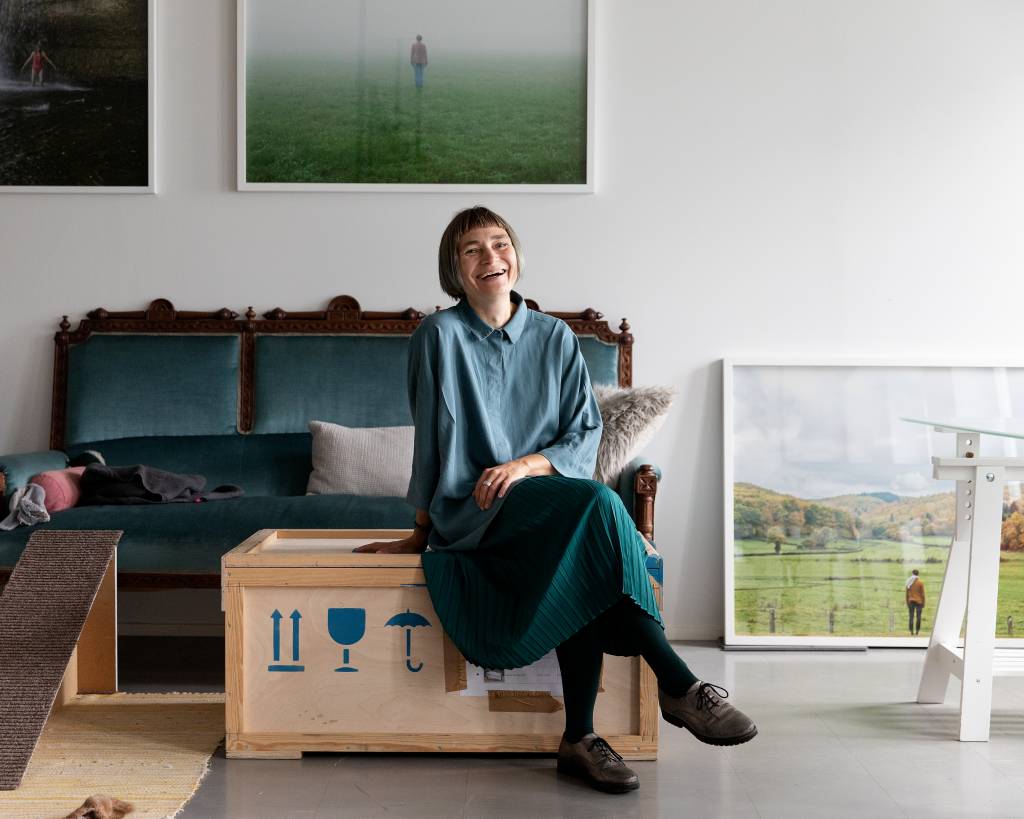 From a Master of Chemistry to a photographer

An exhibition with photos from the latest work of Elina Brotherus is about to open in May in Hämeenlinna Art Museum. The exhibition curated by Timo Valjakka features Finnish and Nordic art from the collection of art collector Nicolai Tangen. One room is dedicated to the new photos by Brotherus.

The project started when Tangen invited Brotherus to work in Kristiansand, Southern Norway. For two years, Brotherus had the opportunity to explore the area and take photos of the places that were interesting to her.

“I had the chance to take my own photos in their landscape,” says Brotherus.

Elina Brotherus (born 1972) is a photographer who has won various awards and worked in photography for more than two decades. She has had several solo exhibitions in Finland and around the world. In 2008, she won the state prize for photographic art.

Brotherus also holds a master’s degree in chemistry. However, by the end of her studies, she already knew that she did not want to work as a researcher of natural sciences and applied to the University of Art and Design Helsinki (currently known as Aalto University) to study photography. She describes it as one of the happiest events in her life.

“I am probably a better photographer than I would have ever been as a researcher in chemistry. I am pretty impatient and the horizon always seems so far away if you are a researcher. I want results now,” says Brotherus.

“I know that the best way to deal with work is to complete it. Artists also have to work hard. I think it has helped me that I have had to develop my intellectual side.”

The field of art has changed a lot during her career. Through digitalisation, the equipment and methods have undergone major shifts and the visual world is saturated with pictures in a different way today.

“Everybody takes photos and selfies now. At the beginning of my career, I was always asked why I took so many photos of myself and if I am a narcissist. I have not heard these questions for a long time,” Brotherus says with amusement.

Brotherus thinks it is good that photography has established its position in contemporary art. The debate over whether photography is art was still going on in the 1980s.

“This seems rather absurd from a modern viewpoint. Of course photography is art. Art is what we define to be art,” she says.

According to Brotherus, it is difficult for artists to secure an income in Finland due to the very low number of art collectors in the country. She believes that there is not an established culture of art collection in Finland, which is why buying art is not necessarily considered to be important.

“How can we achieve the level here that those with the money to buy art would feel that they gain social capital by doing so? That an art collection would be considered a wonderful thing in their social circles? I am not sure if any artist can guarantee a decent income by solely focusing on Finland. As it is, most of my income is from other countries,” says Brotherus.

Brotherus believes that copyrights are clearly important and necessary.

“It is only fair that authors receive some sort of remuneration for the use of their works. For me, personally, copyright remunerations are not a significant source of income, however.”

“A positive trend is that many museums have begun to pay exhibition remunerations to artists. This was not common when I was starting my career about twenty years ago.” 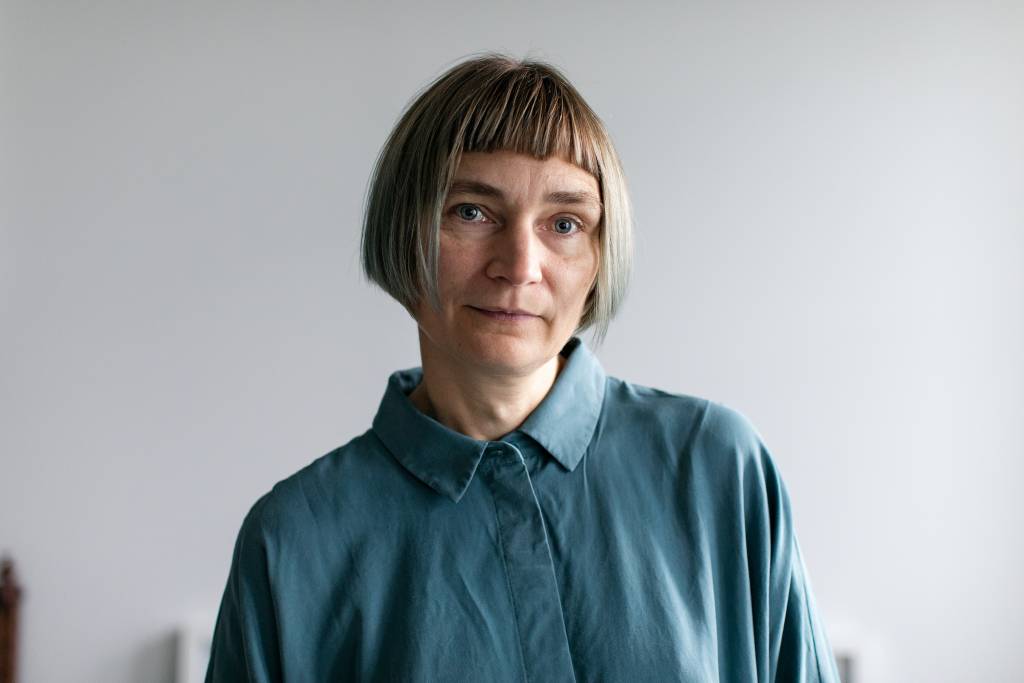 In dialogue with art

Brotherus draws particular inspiration from art history, architecture and literature. Last year, Brotherus travelled to Corsica, where she was guided by the writings of the late German writer W.G. Sebald. A collection of unfinished drafts by Sebald, titled Campo Santo, was released posthumously.

“I went to the places Sebald describes in his texts as if to engage in a dialogue with a dead writer,” says the photographer.

Brotherus likes to work within these kinds of self-developed or external frameworks. She feels that she needs a focused theme as “the world is so full of everything.”

“The way I see it is that, in order to create art, you need a time and place. The place can be any place, however.”

Brotherus applies the same method of limited focus in creating works for a co-exhibition with photographer Hannele Rantala. Brotherus and Rantala take turns to determine a common objective and try to accomplish it in their own ways. The versions of both artists are presented in an exhibition titled Correspondence to be opened in Ateneum Art Museum in 2022.

Brotherus became interested in architecture five years ago when she worked in a private house outside Paris, France, designed by Alvar Aalto.

“I had never realised how impressive architecture can be before I experienced how pleasant it is to live in a well-designed house myself. We spend the majority of our time in pretty mediocre spaces,” says Brotherus.

Brotherus has since then taken photos in other houses, such as Alvar Aalto’s summer residence in Muuratsalo, Finland, and the Villa Empain in the Art Deco style in Brussels, Belgium. She has plans for many different locations in which to take photos. She says that she is creating a new type of architectural imagery.

“There are usually no people in architectural photographs. The fact that I bring a human presence into these spaces makes the photos different and my photos. In the end, I am a photographer of people.”

Brotherus says that the presence of a human creates an experience of encountering and sharing the space with someone in the viewer. She is often featured in her photographs. The significance of using herself as a model has changed over the years.

“First, it was merely a proof for me that what I look like is real instead of faking or acting,” says Brotherus.

She says that she has made autobiographical works at two stages of her career: At the end of the 1990s and at the turn of the 2010s. Brotherus says that life had taken over art during these times.

“When something happens in your life you cannot ignore, it becomes apparent in your artistic work. I am not aiming for this but neither am I planning to hide it,” she says.

In most cases, being a model in her own photos has been a practical solution. On her travels, Brotherus has often been in a situation where there are no others present. In these cases, she has decided to represent humanity. This is the role her presence in her photos typically has: Brotherus does not represent herself or a woman, but a human.

As the years have gone by, it has become interesting to explore the changes caused by age. Brotherus’ character has become a recognisable part of her artistic expression.

“I hope I will grow very old so I can put a picture of me in my eighties next to a photo of a young me.”