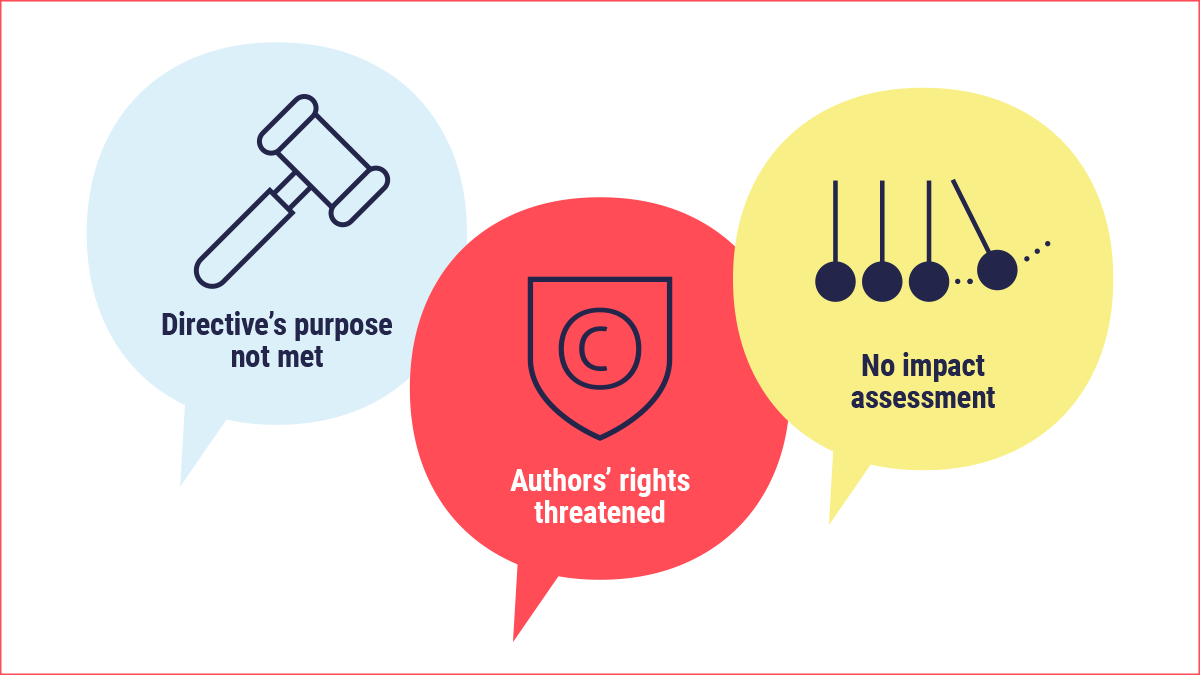 Copyright makes it possible to earn a living with creative work. If creative work is no longer protected by effective legislation defending the rights of authors, those working in culture, information and entertainment will be significantly worse off than now.

The draft Copyright Act does not meet the intention of the EU’s Directives to improve the position of copyright holders in the online environment and harmonise copyrights in the digital single market. The justification for the draft law is, in many respects, very inadequate and value-laden. The effects of the proposed legislative changes are dealt with in an oversimplified manner with no research-based assessments.

We issued our detailed statement at the end of October via the Lausuntopalvelut.fi system. You can also read our statement in Finnish on our website.

The draft law proposes a broad restriction on copyright in education. In practice, this would mean that the author of educational material, literature or a film, for example, would no longer have the protection of copyright regarding the use, copying, distribution or modification of their work. In education, works would be allowed to be used without any regard to their authors.

The scope of the copyright restriction goes far beyond the illustration for teaching in a digital learning environment allowed by the Directive. The proposed restriction is not sufficiently proportionate or balanced for the fundamental rights of authors.

If implemented, the proposal will jeopardise the publishing of educational materials and destroy the licensing system built to protect authors and publishers. Copyright revenues for authors would be substantially reduced.

The restriction would also make the use of works less clear and legally uncertain from the teachers’ perspective.

It is our view that the current comprehensive and legally certain collective licensing system must be maintained as the primary means of enabling the use of works in education. It can be supplemented by a limitation regarding illustration for teaching, in line with the Directive, for use where licences are not available. A similar solution was also adopted in Sweden.

We are disappointed that the possibilities of the extended collective licence have not been utilised in the draft law to the extent offered by the Directive on Copyright in the Digital Single Market.

The extended collective licence is a copyright licence that allows for easy and responsible use of works in situations where there are so many works in use that not all authors can be easily reached in order to gain permission. Such situations include the retransmission of TV programmes and the copying of printed books and magazines, for example. An extended collective licence gives the user a comprehensive and legally certain licence to use the works.

In terms of the Online Broadcasting Directive, the draft law is exceptionally poorly prepared, internally contradictory and conceptually confusing. Retransmission of television programmes refers to their unedited distribution simultaneously with the original broadcast over cable or other networks.

The draft eliminates retransmission of TV channels by defining it as original transmission, contrary to the directives and international agreements.

The draft eliminates retransmission of TV channels by defining it as original transmission, contrary to the directives and international agreements. This must not happen. Retransmission has an internationally binding definition, which Finland cannot deviate from.

Nor can retransmission be extended to cover video-on-demand (VOD) services as proposed in the draft bill. The Online Broadcasting Directive must be implemented in its original wording, without any additions or changes.

The Online Broadcasting Directive regulates the concept of retransmission in a technology-neutral way, so that the way in which the signal is received is irrelevant. Under the Directive, retransmission is subject to the consent of the authors of the television programmes, who are also entitled to remunerations for any retransmitted content. The economic importance of this issue for the Finnish audiovisual industry is very significant.

Flaws in legislation need correcting: Authors must be guaranteed the right to decide on the use of their works in digital services