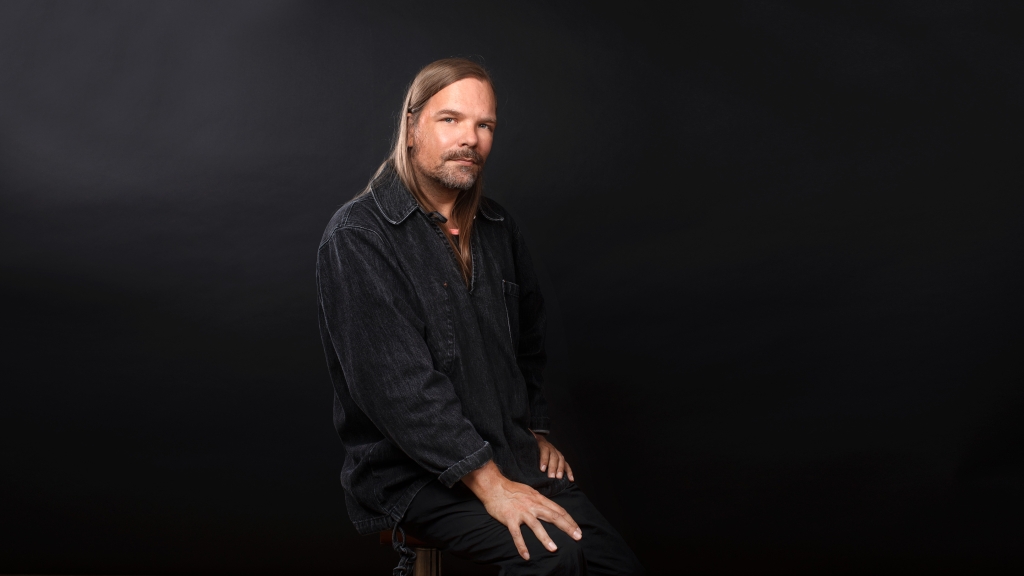 What is meaningful artistic and cultural activity in the era of an ecological crisis?

This question was asked by Tuomas A. Laitinen, winner of the 2021 AVEK Award, in his award acceptance speech last autumn. Since then, the sense that we are living through an exceptional crisis period has only deepened further, at least in Europe. At the turn of the year, the pandemic was extended by the global spread of the Omicron variant of COVID-19. In February, Russia invaded Ukraine.

“Of course, these are difficult times to consider the fundamental questions of artistic activity at such a general level, amidst all of the chaos. On the other hand, the thought of giving up is also difficult,” Laitinen says. “Many of my works are, in some way, related to major social issues, for example through various ecological aspects, but it’s also interesting to bring strange layers and surprising connections to the discourse.”

Art can serve as a type of tool for imagining a different reality. It can describe the state of things but also show how things could be different. For example, Laitinen makes reference to climate fiction, which allows the future to be examined through both dystopias and utopias. The consequences of climate actions can, in a way, be tested with the help of this type of political imagination.

“This often involves the ethos of seeking different ways to live on Earth through active imagination. I understand that expressing things directly through art is important for many people. However, for me personally, the most natural way to approach work has been through collages and layering and examining the connections and mutual dependencies between things.”

Many of Laitinen’s works examine themes such as the formation of knowledge, the dependencies of the body and matter, and the change in ecosystems. However, he avoids categorising art too closely and putting his works into words. For example, calling a particular art work eco art or ecological art feels narrow and simplistic.

“If I could exhaustively explain with words what the art work is all about, it would become pretty bland as far as art goes. This is related to the dominance of descriptive language and the logic of verification, which asserts that everything must have a ‘reasonable’ explanation,” Laitinen muses.

“I actually think that interesting art that delves into the ecological aspects always takes into account the complex dependencies, agencies, surpluses and traces related to things and situations. In other words, the art focuses on connections between things instead of an individual point. Individual works, or condensations, can perhaps be thought of as a type of extract created by mixing things together.”

For Laitinen, environmental issues crystallise into tools and ways of working, such as the use and recycling of materials. For example, when designing how to hang an installation, Laitinen tries to select methods suitable for different types of rooms, allowing them to be reused later.

On the other hand, he emphasises that this type of thinking is not necessarily a good fit for all types of art. However, his own working methods are built so that the reuse of materials can be a part of the artistic process. Material circulation became a part of Laitinen’s thinking around 2012–2015, when he created a series of works that examines the circulation of copper, extractivism and mythologies. The works were first displayed at Espoo Museum of Modern Art (EMMA). Extractivism refers to an economic model that is based on the large-scale use and exploitation of natural resources by the world economy.

“From mines, copper is taken to be refined and then delivered to a company that uses it to manufacture various products. At the same time, cities function as another type of mine, as copper is stolen from the structures of buildings. Next, the material ends up in the hands of consumers in a slightly alienating form, in which the material’s historical layers are efficiently covered up,” Laitinen says.

“After that, it has been difficult to think about any material without contemplating the layers related to it and the mechanisms of oppression often found within.”

According to Laitinen, interesting syntheses are constantly taking place across art forms in the field of media art, and these syntheses could also help identify new types of work for artists. For example, Laitinen says that game art or game productions could offer opportunities for interesting collaborations in the coming years – as long as there is will and channels for such collaborations.

“Strict distinctions between art forms make it more difficult to combine things. Ultimately, the production process can be pretty similar in many contexts. Even in video art, there are so many different art forms and notions of what it is and what it could be that focusing solely on media-centric discourse seems to be pretty useless,” Laitinen says.

However, new working methods require the involvement of parties that can facilitate different types of skills and meetings.

“We also need parties besides art institutions to become involved in this in some way. When new technological opportunities are discovered, some artists are prepared to use them and experiment with them. It would be great to receive broader support in this experimentation phase,” Laitinen summarises.

Symbioses and syntheses come up often in Laitinen’s conversation. He draws inspiration for his works from the doctoral dissertation that he is currently writing on symbiotic processes for Uniarts Helsinki. Laitinen is currently focused on the industrial symbiosis, which refers to ways of making use of surplus materials generated by a particular sector of industry in another sector of industry.

“It’s interesting to examine how the concept of biological symbiosis seeps into other areas of society. Symbioses are also reflected in the way in which I make art. How can I make use of the surplus materials from my own works, be it a rendered image or a glass element for my next piece? This practice may, perhaps, also lead us to the question of how continuums manifest.”

Today, Laitinen tries to think of the creation process of his works as a type of continuum and collage in which combining things again in a new way reveals new perspectives and, through them, new art. He likes the recipe metaphor that sees individual subjects and different ways of working creating a new type of ‘alchemistic concoction’, i.e. a new work that can be more than the sum of its parts. The work can be something different from what the artist originally expected or set out to pursue.

“I often say that the theme of my works is reaction. Incorporating materials and lifeforms into the same space always gives rise to new kinds of reactions. That’s why it is important to experiment and combine different research ideas,” Laitinen says.

On many occasions, an art work may come about through experimentation and the use of different working methods. Then there are times when a particular word or way of thinking may start to fascinate the artist and propel the artistic process forwards. One example of such a word is octopuses, for which Laitinen has created glass sculptures. 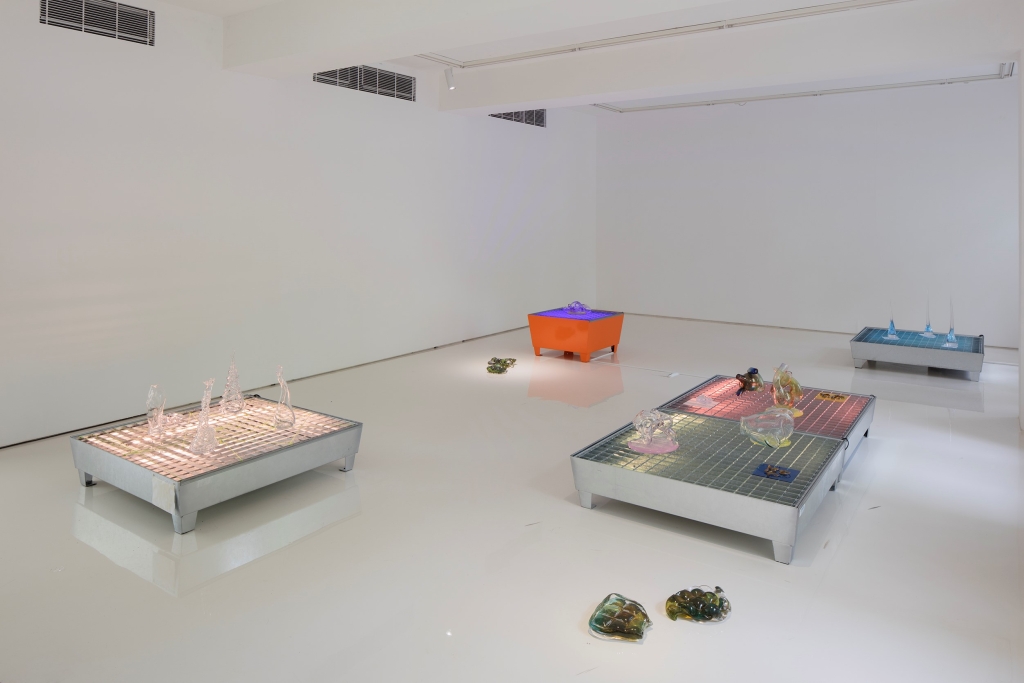 Laitinen questions the project orientation typical for our society, which means that one work is completed before another is started. Collage-oriented thinking is also linked to the reuse of materials and the fact that we can came back to the same subjects many times.

“Art could be like a garden-like organism that gradually grows, and it can include many types of research.”

It is also very important for Laitinen that the work resonates at the emotional or bodily level. He says that he often thinks about how viewers and experiences relate to the works or what types of bodily experiences a work can evoke.

“Particularly when making installations, it’s fascinating to think how the work will function in the room and as part of the overall experience. This also largely depends on the architecture and the experiencer’s movements in the room. I also thought about the ways in which we experience things when I was making glass masks. Putting on a mask changes how you hear and see things and also how other people see you. And the glass sculptures made for octopuses can also be seen as a type of biomorphic architecture, a suggestion for interspecies communication through a bodily experience.”

Laitinen’s Solvent exhibition will be on display at Helsinki Contemporary until 3 July. Laitinen describes the exhibition as a combination of themes he has examined before and entirely new perspectives.

“A key element in the exhibition is spill pallets intended for environmental protection, which I’ve used as the basis for my works. I’ve thought a lot about containers, protections and symbiotic processes. On the other hand, there is also something visually fascinating about these pallets. They remind me of props used in 1970s and 1980s sci-fi movies, such as Silent Running and Alien.”

The exhibition also displays a new multichannel audio installation and glass sculptures from different series, such as works inspired by tear bottles. The Cauldron is an audio installation that combines a symbiotic collection of recipes, bowel-like sounds, polyrhythmic breathing and environmental data. The work is inspired by the three witches in William Shakespeare’s Macbeth.

Laitinen’s works have been on display at several private and group exhibitions both in Finland and abroad. The ΨZone installation, which was on display in Vallisaari during Helsinki Biennial last summer, received a continuation in the form of music early this year, when Laitinen released an album called Sapiduz under the artist name TAL. Sapiduz is a hypnotic mix of modes of electronic and medieval music. The songs will be performed live for the first time at Flow Festival on 13 August, with singer Milla Mäkinen, composer and musician Timo Kaukolampi and others joining Laitinen in an ensemble.

Next AVEK Award will be presented on 9th September 2022. 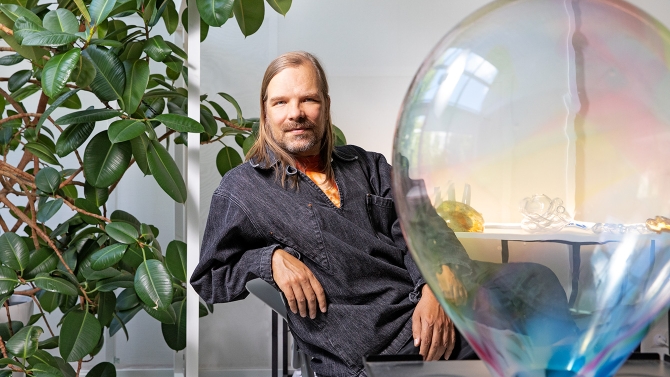 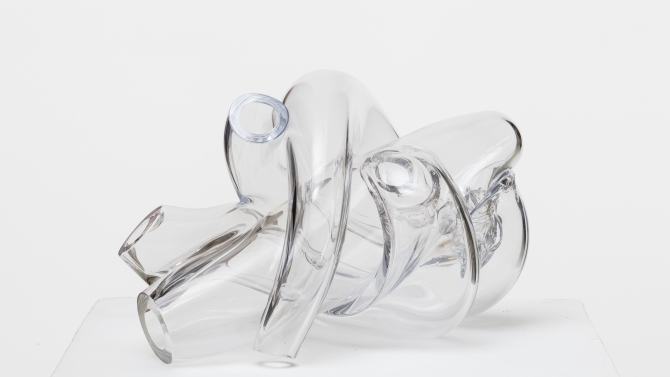