Marikki Hakola (b. 1960) is a Finnish media artist and film director who has worked in art since the early 1980s. Hakola’s works have been displayed at numerous exhibitions and festivals in Finland and internationally.

Hakola is currently completing her doctoral dissertation at the Department of Media at Aalto University. She has created four works as part of her dissertation, the last of which was just completed. Mirages, which is about identity, empowerment and being a part of a community, will premiere in the spring of 2021.

Mirages is a music and dance film that combines performing arts with virtual scenography. This kind of interdisciplinary art has fascinated Hakola throughout her career – she often collaborates with artists in different fields, and her works often include different art forms, such as dance, music, moving pictures and performance art. Hakola also sees interdisciplinarity as one of the strengths of media art.

‘Media art has provided an opportunity for artists from different fields to collaborate across art forms. When a dance artist begins to make video art, for example, it often involves music and some other visual elements,’ she says.

The collaboration between artists has also challenged traditional art institutions to change their ways of working. These days, museums hold concerts and concert halls show video performances, for example. 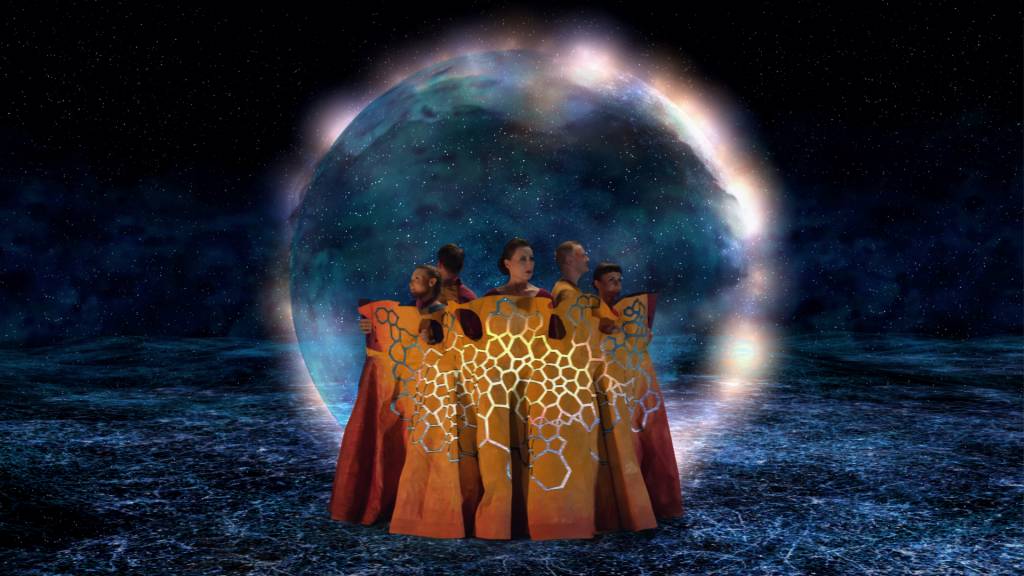 The combination of different art forms notwithstanding, the most important thing for Hakola is the content of the work. Her scriptwriting phase is usually preceded by extensive groundwork. She reads a lot about the subject, examines it from different perspectives and garners all the available information. Her bookshelf is bursting with source materials related to her previous works. Only after careful groundwork does she write the script and decide on the method, which must serve the content in the best possible way.

However, Hakola does lean towards certain art forms or methods. She finds contemporary music and contemporary dance particularly appealing. In addition to this, body language has always fascinated her more than spoken dialogue, for example.

‘This is not a hard and fast rule; I have also used dialogue in my works. But there are many other ways to tell stories than the written and spoken word,’ she says.

A work of art becomes real in the audience’s experience

When Hakola was accepted to study at Uniarts Helsinki’s Academy of Fine Arts in 1980 (Finnish Art Academy School at the time), the art of moving pictures was a new thing in Finland and was not really taught anywhere. According to Hakola, media art as a concept did not even exist yet. However, there were international examples. While interrailing in Europe, Hakola saw video art and realised how visual thinking could be combined with music, which had always been close to her heart.

‘When I first got to cut video footage, I realised that this is my thing. I realised that I can handle visual elements in the same way that a composer handles auditory elements,’ Hakola says.

I think that it can be said that a work of art does not exist if it is not experienced.

For Hakola, art is essentially about dialogue. Even though a work creates starting points and guidelines for its viewer, in the end, the work only becomes art in the viewer’s experience.

‘A work becomes part of the world precisely by becoming part of the conversational context in which the artist lives, influences and exists,’ Hakola explains. ‘I think that it can be said that a work of art does not exist if it is not experienced. It is experience that makes a work of art become real.’

According to Hakola, the audience of the work should be kept in mind when creating the work. This does not mean that the artist should court the audience with their work or, on the other hand, underestimate the viewer’s experience or perspective.

‘Everyone views or experiences each work differently. There is no single audience,’ Hakola points out.

Indeed, art is not about dialogue between a certain audience and the artist. Instead, it is about discussion about being human in general. Hakola does not feel that she is creating art for herself and believes that every artist wants their work to be experienced by an audience.

Currently, Hakola is particularly interested in the possibilities of virtual and augmented reality in art. In addition to her dissertation, she is currently planning a new work that includes both media art and VR technology. However, she emphasises that once again the focus is on content rather than the technology used.

Over the years, Hakola has received support for her works from AVEK several times. One particular reason she considers the grants to have played a significant role is that they have often been provided at a time when there has not yet been other funding. The grant has been an encouragement to continue. She received her first grant early in her career, when AVEK was also just established.

‘AVEK’s first commissioner, Kaj Holmberg, was very open-minded. Three short video works were made from the materials of the PIIPÄÄ performance work with the support of AVEK. I think that had I not received this early-phase funding at the time, my working life could have developed in a completely different direction,’ Hakola reflects.

‘Production culture should be developed to provide artists with even better resources to work with larger teams and better technical quality,’ she says.

She feels AVEK’s Mediarata support is important for the development of the production culture, as it creates an opportunity for longer-term activities rather than just creating individual works. The aim of the support is to improve the operating conditions of production companies and producers producing media art, promote the continuity of activities, facilitate the realisation of international media art collaborations and promote the professional international distribution of media art.

In general, Hakola hopes that more resources will be devoted to media art in Finland. She highlights the role of AV-arkki, for example, which should be further strengthened.

‘AV-arkki is a very important player in the field of media art in Finland. Distributing media art works domestically and internationally and finding their audiences are key to the development of this entire field of art,’ she stresses.

‘The resources that society devotes to media art are really small compared to the volume at which media art is presented and the audience figures.’